Hall of fame for TaeKwonDo Master 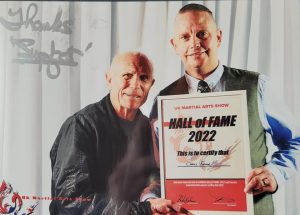 On Sunday 8th May 2022,  9 family members of Master Snow went up to Doncaster for the night as he was inducted into the UK Hall of Fame, only to be extra surprised that he was up for a main award, around 30 people were put on stage from many Martial Arts groups and Bob Sykes the organiser done a speech that each person on the stage has devoted there life to Martial Arts from different arts.
Then WOW! he actually goto meet his ideal and talk to him. Bill superfoot Wallace…. what a great guy. A guy that has inspired him throughout his 37 years in TaeKwonDo.
He also met Master Tizick and his lovely wife Zoë Tkd Tizick who also got awards even if John said’ Thats not fair you got the main bad boy award’ …. TBH it was an amazing time as we all had everyone around him and a few friends from TKD that he cares about.
As Master Tizick said, We were there reprinting ITF TaeKwonDo as only us there so that alone was a big deal.
Chris said thanks to my georgious partner Tracey Leonard and Rhiannon Snow, Angela Purvis Amanda Snow, Theresa Snow, Christine Snow and there lovely partners who joined him too.
He also sent thanks to the UK Martial Arts Awards team for inducting him. On an end note he said to those close to him he is honoured and humbled by the award.
We use cookies to ensure that we give you the best experience on our website. If you continue to use this site we will assume that you are happy with it.Ok